Written by James Wilson on March 18, 2019. Posted in Bodyweight, Strength Training for BJJ

Glute Bridges are a staple of BJJ training because they do such a great job of training an essential mat-specific movement. Being able to bridge and create space is one of the first things you learn and something you keep working on as you advance.

And while we all know and love the regular Glute Bridge, there are a lot of different variations of this movement that we should be using as well. These variations can help shore up weak links with specific applications of the Glute Bridge, like applying joint locks or keeping the knees from getting smashed together.

Below are 5 of my favorite BJJ-specific Glute Bridges that can help you move better on the mats. Pick one that works on a problem you have or area you want to get stronger and then do it 1-2 times a week, doing 2 sets of 5-15 reps. You can add it into your workout or do it as part of a daily movement practice, the important thing is to get the work in.

We all know that Glute Bridges have a lot of carryover to the mats but something a lot of people don’t realize is the importance of keeping your hamstrings engaged to keep the heels in tight. A lot of people lose joint locks because they extend the knees with the hips, increasing the space and allowing room to escape, which is directly tied to this movement skill.

Using Val Slides under your feet during a Glute Bridge can help reinforce keeping the hamstrings engaged, making it a more BJJ specific movement. BTW, you’ll notice a do 3 good reps followed by 3 bad reps in this video so you can see what happens if you don’t keep the heels in while doing the bridge.

Another great way to make the Glute Bridge more BJJ specific is to pinch a yoga block between your knees. This not only works the specific skill of keeping a tight squeeze with the knees while extending the hips it also helps keep stress off the lower back by engaging the core more than a normal Glute Bridge.

Glute Bridges with a band around the knees is another way to spice things up. Since the glutes are also responsible for keeping the knees apart, this one is double trouble for them. Being able to resist someone smashing your knees together while extending the hips helps with controlling space on the bottom, making this another great BJJ specific exercise.

Marching Glute Bridge I’d a great way to work on single leg bridge stability. A lot of times we bridge with two legs to create space and then transition to a single leg stand as we use the other leg to control the space we created. A lot of people simply flop back down to the ground when this transition happens which ends up just going them smashed again. Using this movement to work on this BJJ specific skill can help you avoid this problem. Note the Val Slides under my heels for more hamstring activation and stability challenge.

The Ramping Isometric Glute Bridge is the easiest way to improve raw strength of this essential BJJ specific movement. The a belt around your feet and waist as shown and then do 30 seconds at 50% effort, 30 seconds at 80% effort and then 30 seconds at 100% effort. No rest between the rounds, just ramp up the tension. Do one set to failure and say hello to your glutes, which will be on fire.

As a jiu jitsu athlete and strength coach I’m always looking for ways to improve my results. Which is why an ad on Instagram for a training tool with a funny name caught my eye a few months ago.

While I almost never pay too much attention to things advertised on the ol’ social media channels, this one looked interesting enough for me to actually order. After a few days it arrived and I got my first chance to use what would become a favorite new training tool. 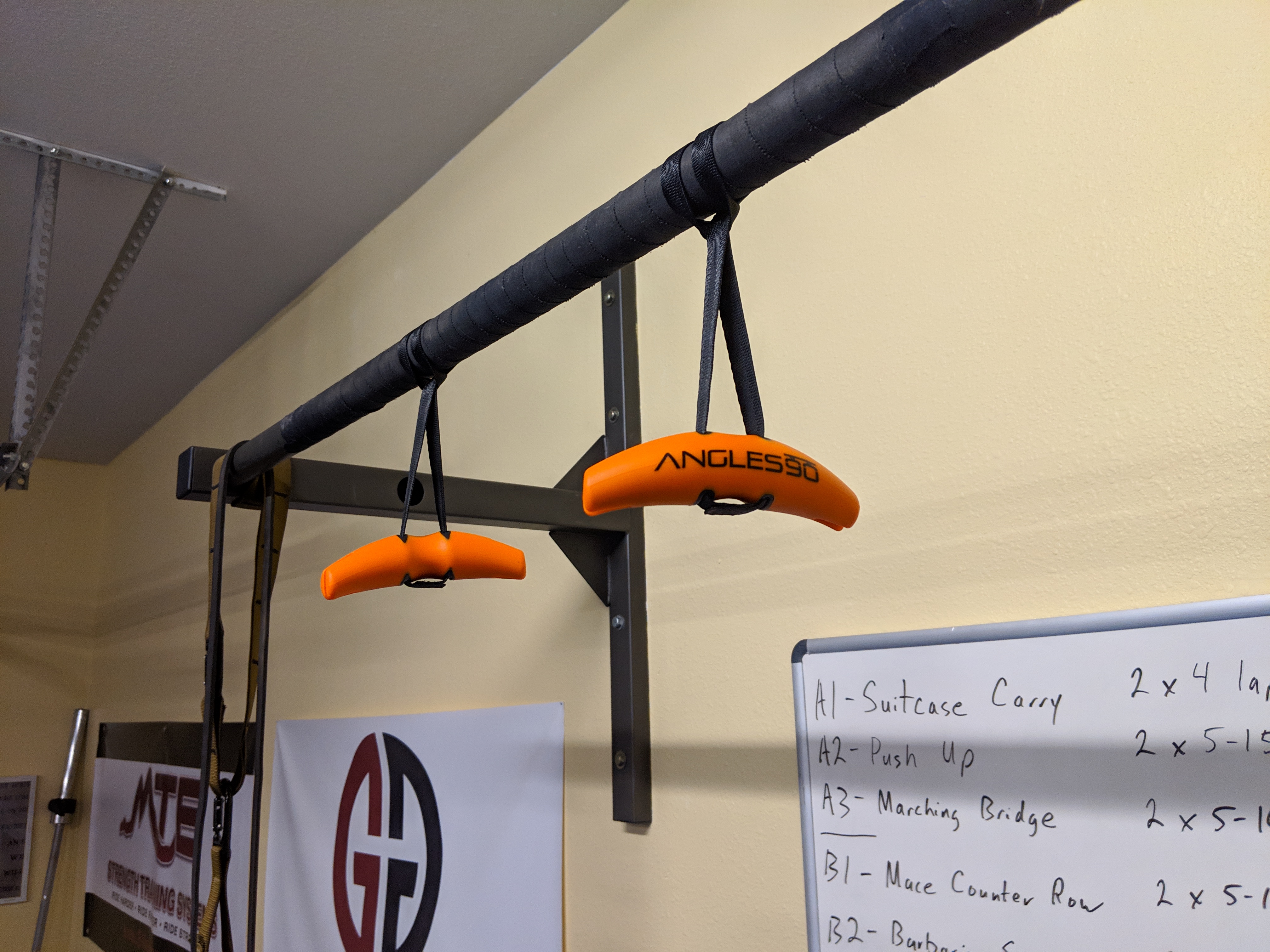 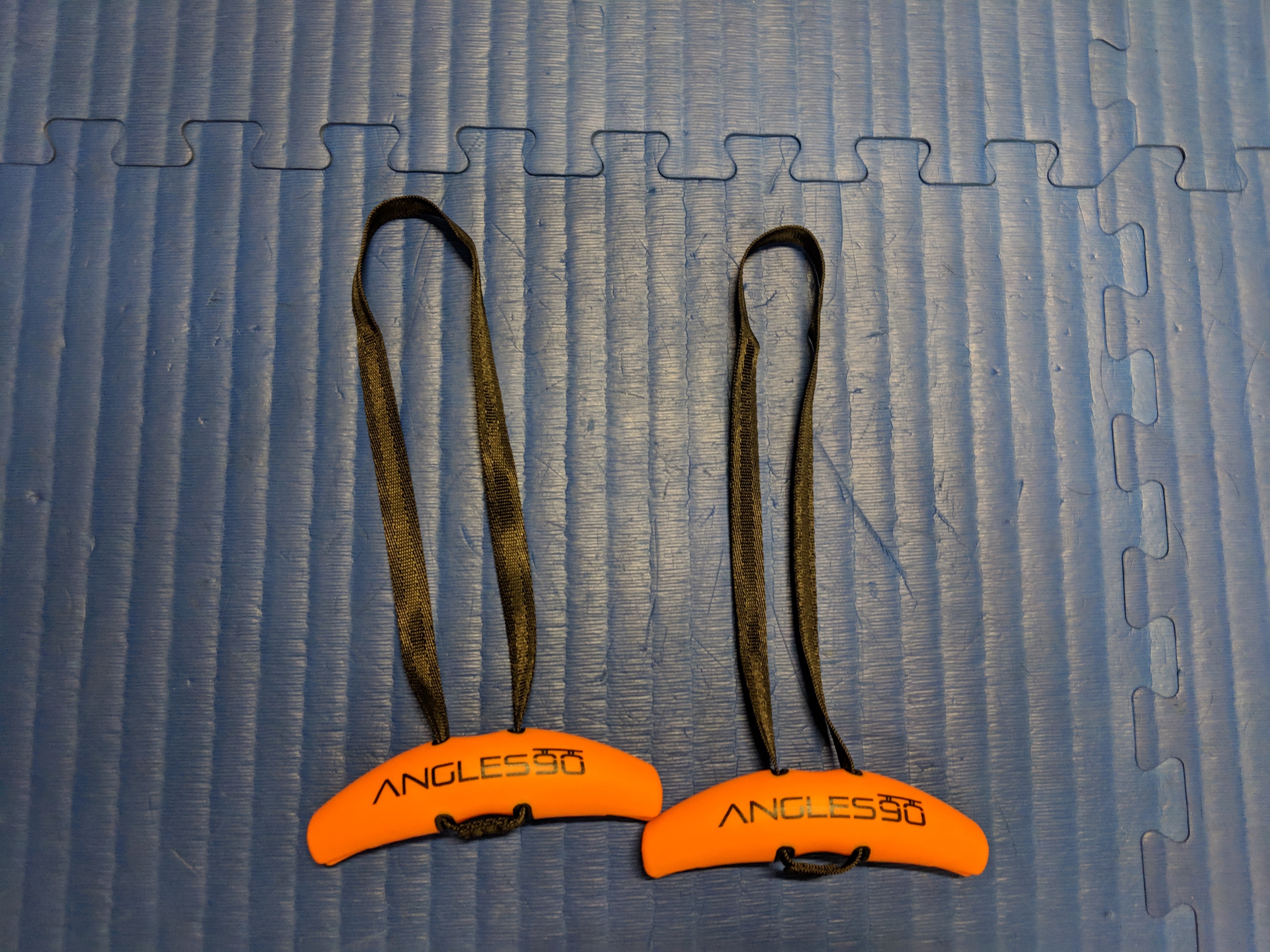 The Angles90 is a simple training tool that really helps improve the feel and functional carryover of some key exercises, most notably the Pull-Up/ Chin-Up and the Deadlift.

By allowing for a more natural rotation of the elbows and shoulders during these exercises it lets you get more out of each rep and train a very important BJJ specific movement skill. It also allows for a variety of grip options, giving you some different ways to train it as well.

Another benefit to using the Angles90 is that they take a lot of stress off the wrists, elbows and shoulders compared to using a fixed bar position. I’ve personally found them to be much easier on my elbows and wrists during Pull-Ups/ Chin-Ups and I can feel my shoulders staying in a better position during Deadlifts.

I shot this video to show you the Angles90 and why I now use them for all of my Deadlifts and Pull-Ups/ Chin-Ups.

I’ve also found it useful for KB Swings and for Steel Mace Counter Rows. If you use these training tools then check out this video for how to use them for these exercises.

They cost less than $50 and I can’t recommend them enough to help you get better BJJ specific results from your Deadlifts and Pull-Ups/ Chin-Ups. You can find out more and order a pair for yourself at their website www.angles90.com.

You can also use the coupon code A90WILSON10 to save 10% on your order. Great training tools that actually deliver results and don’t cost a small fortune are pretty rare, which is why I’m glad to be able to share this one with you.

Written by James Wilson on February 20, 2017. Posted in Exercises, Kettlebell

Written by James Wilson on February 20, 2017. Posted in Bodyweight, Exercises

Written by James Wilson on February 20, 2017. Posted in Exercises, Kettlebell